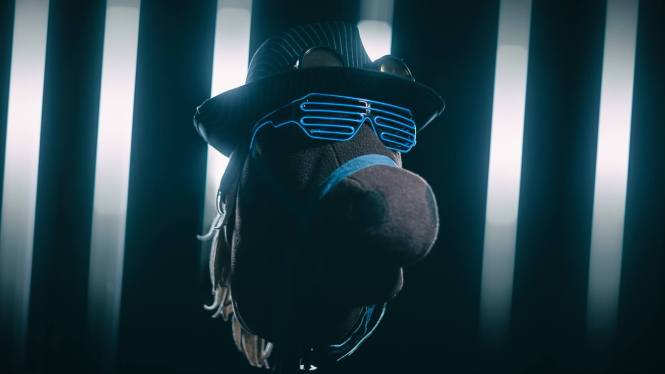 MR HORSE (full name: Mr Emmanuel Stalin Auchtermuchty Steven Horse, BA (hons) ) is the mascot, and now manager of MUSTARD ALLEGRO. Summoned into this world through a haunted painting, Mr Horse has successfully eliminated all opposition to his dominance. Not unlike Iron Maiden’s celebrated Eddie, he makes a spectacular appearance at the end of every MUSTARD ALLEGRO show. Unlike Iron Maiden’s celebrated Eddie, Mr Horse is not a 12-foot tall robot who fires lasers around the stage.

Despite being a stuffed horse’s head on a broomstick, he is not to be underestimated, and must be treated with respect at all times.

Unless, of course, you like waking up with no balls.

Mr Horse now has a wife (Mrs Horse). Any suggestion that domestic bliss may have mellowed him can be easily dispelled because he pushed an old man off his mobility scooter the other day (in fairness, the old man was trying to steal Mr Horse’s mobility scooter at the time…)